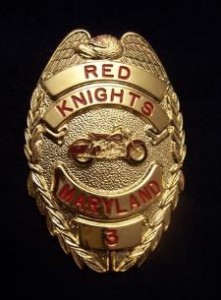 The badge we wear is something we at Maryland 3 are very proud of.
A few years ago, we received a check from an Anonymous Red Knight’s supporter who
lives in the Ocean City area. They were so impressed with the work that the club had
done in providing funding, support and charitable efforts within the community, that they
decided to make an  donation to MD3 in the amount of $1,000.

The only stipulation given was the club was  the funds were to be used by us, just for us,
for something fun.  After much discussion, lots of ideas and careful consideration a suggestion was
presented by our Vice President, Doug Jones.  He had the idea to use the money
towards badges.  This would be something that could wear for years to come instead of
just blowing the money on a party or t-shirts.  That’s how it all came to be and we at MD3
are very proud to wear these badges as a show of pride, respect and brotherhood.

The check was presented to us by “Salty” of the “On the Road with Harley-Davidson”
television show during one of the show’s tapings of the All Star Chopper Show. We were
all at Ponzettis Pizza in Ocean City and were there with some very special guests
including Arlen Ness, Russell Mitchell and John L. Meiklejohn.

As hard as it was for us to agree to take the money, it was even harder to figure out what we would do with it. We were told that we could have a party or maybe by t-shirts with the money, but this all sounded to short lived and a bit of a waste of good money and a less than responsible way to spend it.

Here lies one of our badges that was left at the display of thanks which is inside the gates and just outside the “hole” at Ground Zero in New York.  This badge will remain there with all of the other tokens of thanks to those who worked so hard to recover our lost Brothers at the World Trade Centers after the tragic events of 9-11-01. 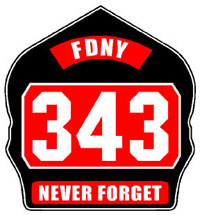